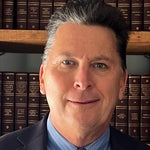 Matthew also previously served as an Associate at our law firm representing Long Island school districts as general counsel and labor counsel and defending school administration in various types of federal and state litigation including Article 78 proceedings, commercial disputes, and personal injury actions.  Prior to his tenure with Guercio and Guercio, Matthew investigated crime and corruption within the New York City Department of Education as an investigator with the Special Commissioner of Investigation and served as a supervising attorney in the NYPD Legal Bureau. Matthew also taught the legal aspects of school administration as an Adjunct Professor at St John's University.