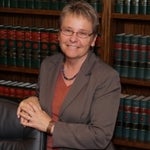 Kathy A. Ahearn, Esq. has been engaged in the practice of law for 35 years. She joined the firm as a partner in 2009, after serving for 16 years as Counsel & Deputy Commissioner for Legal Affairs in the New York State Education Department. As Counsel & Deputy Commissioner, Ms. Ahearn was chief legal counsel to the Commissioner of Education and the Board of Regents, advising them in the areas of K-12 public and private education, colleges and universities, vocational education and services for adults with disabilities, the licensing and regulation of 48 professions, and cultural education (libraries, museums and historical societies). She also served as Acting Commissioner of Education.

Ms. Ahearn's practice is focused on the representation of school districts and BOCES before the Commissioner of Education, in State and federal courts, in State and federal administrative proceedings, and in collective bargaining negotiations. She also provides clients with advice and counsel on all aspects of education and employment law. She is a frequent speaker at school law conferences in New York and nationally. In 2012, then Commissioner of Education John King appointed her to the NYS Task Force on the Dignity for All Students Act, and in 2013 Dr. King appointed her to the NYS Taskforce on School Safety. In 2017, she was appointed by the NYS Bar Association to the Task Force on the School to Prison Pipeline.

Ms. Ahearn earned a B.A. in Political Science from SUNY Stony Brook, graduating Magna Cum Laude and Phi Beta Kappa in 1980. She is a 1983 graduate of New York University School of Law, where she was elected to the Moot Court Board for proficiency in written and oral advocacy. After graduating from law school, Ms. Ahearn entered private practice at the Manhattan law firms of Patterson, Belknap, Webb & Tyler and then Battle, Fowler, Jaffin & Kheel. Ms. Ahearn left private practice in 1989 and moved to Albany to enter public service, first as a State's Assistant Attorney General specializing in litigation defense, and then as an Assistant Counsel and Deputy Counsel at the State Education Department, before becoming Counsel & Deputy Commissioner in 1993.
Ms. Ahearn is a member of the NYS Bar Association and is a Fellow of the New York Bar Foundation. She serves on the Board of the New York State Association of School Attorneys (Past President).